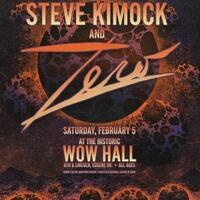 Early in 1980, Steve Kimock joined former Grateful Dead members Keith and Donna Jean Godchaux’s Heart of Gold Band, which already happened to have Greg Anton as its drummer.  Keith fell victim to a car accident and the Heart of Gold Band went away, but the connection that Greg and Steve shared has endured.  The duo immediately recorded an album of new music which would be released decades later, then started a band.  Having gone through many, many names, Greg asked Steve how many were left on the list to consider: “Zero” was the answer, and Zero became the quintessential jazz/rock psychedelic band, a pioneer of the “jam” band scene.