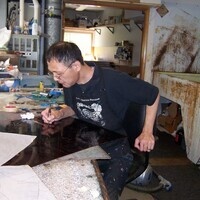 Yuji Hiratsuka: “The Art of Color Intaglio Process and Aesthetics”

Lectures will be in Lawrence Hall, Room 177, 1190 Franklin Boulevard, Eugene, OR 97403 and will also live stream on YouTube.

Yuji Hiratsuka mixes influences of east and west in his work. There is less of an emphasis on socio-cultural commentary and more of an emphasis about the placement and interplay of the visual effects. Hiratsuka plays with the metaphorical aspects of his subjects and their settings by portraying the irony, paradox, and satire in people’s daily lives. His images bear a slight resemblance to traditional Japanese Ukiyo-e prints, which were frequently decorative, brightly colored and featured highly stylized exaggerated and distorted figures, while also expressing contemporary aspects of the western world. Hiratsuka will explain the unique technique of his multicolor intaglio (etching) printmaking process. The process begins with a deep etching printed on a sheet of Kozo (mulberry) paper in black, after which the plate is reclaimed and re-etched for subsequent printing in yellow, red, and blue. In addition, Hiratsuka often applies the fifth or six extra layers of color as desired to enhance the image.

This lecture is made possible by the Gilkey Foundation Fund.