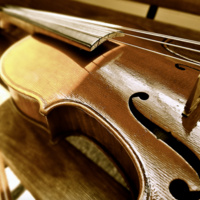 This event will be live-streamed from the SOMD website.

Repertoire will consist solely of works by UO alumni, and will include “Violin Sonata in E Rhodian” by Alexander LaFollett; "The Air is a Chamber" and "The Earth is a Cell" by J. M. Gerraughty; and "The Activity of Sand" and "Movie Music for Portland" by Benjamin Krause.

This project was made possible by a grant from the Mu Phi Epsilon Foundation and seeks to illustrate the diversity of Oregon landscapes through photography and musical composition.

Wyatt True is currently active as a performer and teacher throughout the region and serves as Executive Director of the Delgani String Quartet, a Eugene-based nonprofit ensemble entering its inaugural season. True recently completed a tour of south Brazil performing 20th and 21st century American works with support from the Farnley Tyas Foundation.

David Servias has appeared throughout the Northwest as a soloist, chamber musician, and teacher. He was an Idaho state winner in the collegiate MTNA competition and has appeared as a soloist with the Washington-Idaho Symphony and the Washington State University Symphony. Equally in demand as an accompanist and chamber musician, he has served as a staff accompanist at the prestigious Interlochen Arts Camp in Michigan for several summers.