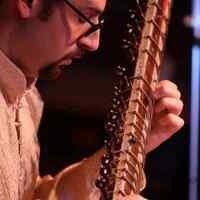 Raised in a musical family, Josh was introduced to music through classical piano at four years old and later, the bass at eight. As Josh entered adolescence he became increasingly dedicated to music and improvisation. He began studying jazz and through that path found North Indian classical music. The music of Ust. Ali Akbar Khan, Pt. Nikhil Banerjee and Ust. Amir Khan made a particularly strong impression on him. From the moment he started studying Hindustani music, Josh was very dedicated to riyaz or practice; it was not unusual for him to play 10-12 hours in a day. He bought his first instrument at age 15 and began his formal training with Dr. Peter Row while attending the New England Conservatory of Music in Boston. In 2005, Josh initiated his training with Ust. Ali Akbar Khan. Since then, Josh has also received training and guidance from the maestro’s senior disciples including Sri James Pomerantz, and Dr. George Ruckert. Presently, Josh is continuing his training with Ust. Ali Akbar Khan’s sons Ust. Aashish Khan and Sri Alam Khan, as well as his senior disciple Sri Anindya Banerjee. Josh has received guidance from Pt. Swapan Chaudhuri and Pt. Tejendra Majumdar and has also learned tabla with Pt. Anindo Chatterjee during his Seattle workshops since 2010. Josh recently recorded his debut CD Homage featuring Pt. Swapan Chaudhuri playing tabla. Homage, was released in April 2013 on Saath Sangat Records. Josh is currently producing his second album,One Evening in Spring featuring Pt. Anindo Chatterjee on tabla, which is scheduled for release in October, 2013.

Josh regularly performs throughout the US, India, and Canada. Some of his most notable performances and lecture/demonstrations have been organized by Harvard University, ITC Sangeet Research Academy in Kolkata, Boston Center for the Arts, the New England Conservatory of Music, the Gandhi Memorial Center, the University of Florida Gainesville, Purdue University, University of Chicago, the University of Washington, the Utsav Festival produced by Ragamala, Basant Bahar, the 2007 Fulbright Conference in Araungabad, India and many others. Josh has performed with Pt. Anindo Chatterjee, Sri Alam Khan, Sri Samir Chatterjee, and Sri Anindya Banerjee. Josh has also been featured on several TV and radio programs across the US and Canada including KPFA in Berkeley, Swar Lahari in San Francisco, and Rag Aur Taal in New York among others.

Josh is also dedicated to teaching, holding regular classes in Portland and throughout the Pacific Northwest both through his music school, Saath Sangat,  as well as at Lewis and Clark College and Reed College. Recently, he has written a sitar method book for the Hal Leonard Corporation- the worlds largest music publisher. The book is geared towards helping beginner and intermediate students learn Hindustani music on either sitar, or the instrument of their choosing. In addition to extensive compositions and exercises, the book includes an audio CD to aid in the learning process. Josh’s book was published in April 2013 and is available for purchase on his website (www.joshfeinbergmusic.com) and throughout the world.

In addition to his work in classical Indian music, Josh has explored the possibilities of the sitar through collaborations outside of traditional Hindustani music. Some of his most noteworthy projects have included a collaborations with legendary tap dancer Savion Glover, acclaimed saxophonist Patrick Lamb, and recording on jazz drummer Richie Barshay’s album Homework (which included pianist Herbie Handcock as a special guest). Recently, Josh recorded on cellist Gideon Freudmann’s new album Rain Monsters, which was featured on a 2012 episode of the Showtime drama Weeds. Josh was also the featured soloist in a series of concerts with the Seattle Coral Company performing Eric Whitacre’s piece Winter, which was composed for choir, orchestra, sitar solo and tanpura accompaniment.

Josh currently resides in Portland, Oregon with his poet-wife Jessica and his daughter Sophia and maintains a busy teaching and performing schedule. Josh is pursuing his Masters of Fine Arts through Goddard College.