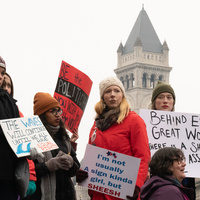 Jane Junn is a professor of political science and gender and sexuality studies at the University of Southern California. She is an expert on voting, political participation, public opinion, Asian American politics, gender and politics, racial and ethnic identity, and the politics of immigration in the United States. She is the author of five books, including The Politics of Belonging: Race, Immigration, and Public Opinion and Education and Democratic Citizenship in America. Her research on the intersection of gender, race, and voting has been widely cited by journalists and political commentators in the aftermath of the 2016 U.S. Presidential election.

Sponsored by the Wayne Morse Center as part of its Democratic Governance Speaker Series. Cosponsored by the UO Center for the Study of Women in Society and UO Women's, Gender, and Sexuality Studies.