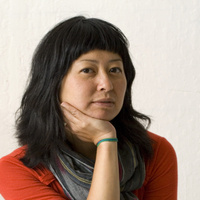 Stephanie Syjuco creates large-scale spectacles of collected cultural objects, cumulative archives, and temporary vending installations, often with an active public component that invites viewers to directly participate as producers or distributors. Using critical wit and collaborative co-creation, her projects leverage open-source systems, shareware logic, and flows of capital, in order to investigate issues of economies and empire. This has included starting a global collaborative project with crochet crafters to counterfeit high-end consumer goods, presenting parasitic art counterfeiting events, and developing alternative vending economies. She will present several key projects that activate both global and national contexts, and touch on social practice as a means to promote public knowledge sharing in an era of increased privatization.

Born in the Philippines, Syjuco received her MFA from Stanford University and BFA from the San Francisco Art Institute. She is the recipient of a 2014 Guggenheim Fellowship Award and a 2009 Joan Mitchell Painters and Sculptors Award. Her work has been shown nationally and internationally, and included in exhibitions at MoMA/P.S.1, the Whitney Museum of American Art, The San Francisco Museum of Modern Art, ZKM Center for Art and Technology, the California Biennial at the Orange County Museum of Art, The 12th Havana Bienal, The 2015 Asian Art Biennial (Taiwan), among others. A long-time educator, she has taught at Stanford University, The California College of the Arts, The San Francisco Art Institute, Carnegie Mellon University, and most recently joined the faculty at the University of California at Berkeley in January 2014 as an Assistant Professor in Sculpture. She lives and works in Oakland, California.

College of Design, Department of Art