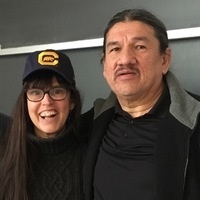 We will gather together for conversation at 11:45 a.m. with the presentation and a Q&A to follow.

Register in advance at https://tinyurl.com/bn6sg2g9.

This event is co-sponsored by the UO Native American Studies program and Many Nations Longhouse.

A recording of the talk will be posted to the UO Food Studies Facebook page and YouTube channel after the event.

About Our Speakers
Ron Reed is a traditional Karuk dipnet fisherman, spiritual leader, and important public figure for the Karuk Tribe. Ron Reed comes from a long and prominent family of traditional spiritual leaders and cultural practitioners, and is the father of six children. In his capacity as the Karuk Tribe’s Cultural Biologist, Ron has been an important tribal spokesperson who has communicated the cultural and health impacts of current river and forest mismanagement to audiences around the world, and works at home to restore Karuk culture and society through reconnecting people, especially tribal youth, to the natural world. His work has been featured in prominent news outlets around the world including National Geographic, National Public Radio, High Country News, and many more. Mr. Reed is a co-founder of the Karuk-UC Berkeley collaborative, has served as a member of the Forest Research Advisory Committee of the USDA which reports directly to the Secretary of Agriculture, a member of the Environmental Justice Task Force of the California Environmental Protection Agency, and was one of half a dozen delegates from California to the first U.S. Social Forum in Atlanta.

Ron and Kari have been working closely together since 2003 conducting policy-relevant research on tribal health and social impacts of environmental decline. In 2004 their report The Effects of Altered Diet on the Karuk Tribe was submitted to the Federal Energy Regulatory Commission as part of the opposition to the re-licensing of the Klamath river dams. Their action represented the first time a tribe had claimed that a dam had given their people an artificially high rates of diabetes and other diet related disease. Since that time Ron and Kari have continued to work on policy driven research projects including work that established Tribal Cultural and Tribal Subsistence beneficial uses in the TMDL water quality process in California for the first time. Together they have co-authored multiple articles and book chapters, and co-supervised over a dozen undergraduate theses. In 2019 their article “Emotional Impacts of Environmental Decline: What Can Attention to Native Cosmologies Teach Sociology About Emotions and Environmental Justice,” received the Best Article Award from the Sociology of Emotions section of the American Sociological Association.