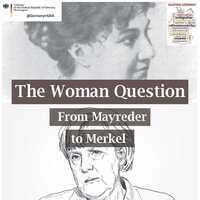 The Woman Question from Mayreder to Merkel

Presented by Dr. Sarah E. Jackson from the University of Massachusetts, Amherst

In 2018, the “Woman Question” is for most a historical rubric, not a current debate. Not that the question was ever answered, or settled, rather it was set aside as unproductive, encompassing to the point of diminishing utility. In German Studies, the term most immediately evokes the turn of the century when both proto- and anti-feminists framed the Frauenfrage as one of the most pressing concerns of the day, comprising a complex of imbricated questions and problems, socio-cultural, political, and aesthetic investments. In large part it is this comprehensive yet heterogeneous nature of the Woman Question that has led most to dismiss it as platform for feminist intervention today. Yet in the age of post-post-feminism we continue to debate many of the same woman questions, if only with different words, and the stakes in the matter are no less high. Focusing on the key categories of gender and subjectivity, University of Amherst Professor Sarah Jackson, a UO Alumna from the Department of German and Scandinavian, will trace legacies of the Frauenfrage from Rosa Mayreder to Angela Merkel, and ask what the Woman Question--in its most comprehensive and heterogenous sense--might have to offer feminist politics and aesthetics in the twenty-first century.