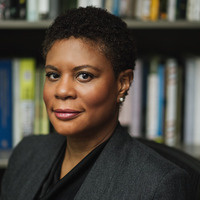 The Social Life of DNA: Race, Reparations, and Reconciliation after the Genome, with Alondra Nelson

Alondra Nelson is president of the Social Science Research Council. She is also the Harold F. Linder Chair and Professor at the Institute for Advanced Study, an independent center for theoretical research and intellectual inquiry. She was previously a professor of sociology at Columbia University, where she served as the inaugural Dean of Social Science.

Nelson began her academic career on the faculty of Yale University and there was recognized with several honors, including the Poorvu Prize for interdisciplinary teaching excellence. An award-winning sociologist, Nelson has published widely-acclaimed books and articles exploring science, technology, medicine, and social inequality.

Nelson is author of several books, including The Social Life of DNA: Race, Reparations, and Reconciliation after the Genome, a finalist for the Hurston-Wright Foundation Award for Nonfiction, and a Wall Street Journal favorite book.

Nelson has contributed to national policy discussions on inequality and about the social implications of new technologies, including artificial intelligence, big data, and human gene editing. She serves on the boards of the Data & Society Research Institute, the Center for Research Libraries, and The Teagle Foundation, as well as the board for African-American programs at Monticello. She also is a member of the board of directors of the Brotherhood/Sister Sol, a Harlem-based youth development organization. Her essays, reviews, and commentary have appeared in The New York Times, The Washington Post, The Wall Street Journal, Science, Le Nouvel Observateur, The Boston Globe, and on National Public Radio, The New Yorker Radio Hour, and PBS Newshour, among other venues.

This event is sponsored by the Wayne Morse Center for Law and Politics as a part of its 2019-21 theme of inquiry, Science, Policy, and the Public. It is part of the African American Workshop and Lecture Series, which is sponsored by the Office of the President and coordinated by the Division of Equity and Inclusion. It is also part of the Lorwin Lectureship on Civil Rights and Civil Liberties.