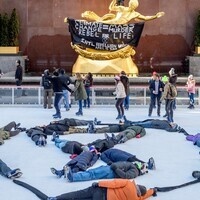 The Politics and Aesthetics of Climate Emergency

We’re told we’re in a climate emergency—but whose is it? For Extinction Rebellion, reducing atmospheric carbon is a global urgency; for green neoliberals, it’s entrepreneurial, a time of economic opportunity; for Indigenous communities, emergency continues centuries of colonial violence and genocide; for authoritarian nationalists, it’s a migration threat best addressed through military security. How might one’s emergency erase or empower another’s? By considering the becoming-activist of aesthetics in relation to both climate mobilizations and the weaponized atmospheres of militarized borderzones (highlighted in the Whitney Museum’s “teargas” biennial and corresponding protests), this presentation considers the complexity of emergency politics, as well as how emergency might give way to the emergence of emancipated futures through intersectionalist social movements.

Speaker bio: T.J. Demos is Professor in the Department of the History of Art and Visual Culture, University of California, Santa Cruz, and Founder and Director of its Center for Creative Ecologies. He writes widely on the intersection of contemporary art, global politics, and ecology, and his essays have appeared in magazines, journals, and catalogues worldwide. His published work centers broadly on the conjunction of art and politics, examining the ability of artistic practice to invent innovative and experimental strategies that challenge dominant social, political, and economic conventions. Among others, his books include: Against the Anthropocene: Visual Culture and Environment Today (Sternberg Press, 2017), Decolonizing Nature: Contemporary Art and the Politics of Ecology (Sternberg Press, 2016), The Migrant Image: The Art and Politics of Documentary during Global Crisis (Duke University Press, 2013), and Return to the Postcolony: Spectres of Colonialism in Contemporary Art (Sternberg Press, 2013). Demos has also curated several exhibitions, including: Rights of Nature: Art and Ecology in the Americas, at Nottingham Contemporary in January 2015; Specters: A Ciné-Politics of Haunting, at the Reina Sofia Museum in Madrid in 2014; and Zones of Conflict, at Pratt Manhattan Gallery, New York, in 2008-09. He has served on the Art Journal editorial board (2004-08), and currently sits on the editorial board of Third Text, and on the advisory board of Grey Room.

Sponsored by: The Moore Chair in the English Department, Department of the History of Art and Architecture, Art History Student Association.