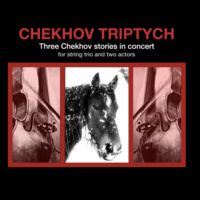 This event will be live-streamed on the SOMD website.

Powerful, tender, funny, and heartbreaking. Music that tells a story. Stories that become music. The Elsewhere Ensemble brings three Chekhov stories to life through music. Featuring Broadway veteran actor MacIntyre Dixon and award-winning actress Libby Skala. Arnaud Ghillebaert (faculty) is on viola with Avery Waite (cello) and Colin Pip Dixon on violin. Anton Chekhov wasn’t only a great playwright and short story writer, but a medical doctor. In these stories he shows himself to be a doctor of the human soul, dissecting our hopes and dreams, our contradictions and our hidden pain. With an original score by composer/violinist Colin Pip Dixon.

The Elsewhere Ensemble is an eclectic group of artists coming from different cultures,different gene rations and disciplines focusing in music, theater and literature. Unlike most ensembles, it is not defined by its form – it is neither a music group nor a theater group (but it canbe either, or any combination of these) – it is defined by the belief that art should be born out of the ties which bring us closer together, reminding us of our humanity. With the continued hope that “classical” music, theater and literature are not for an elite but a human necessity. The Ensemble has performed in NYC, Paris, Lyon, Lebanon, Belgium, Edinburgh. It was invited toperform The Happy Prince and Letter to Brahms at the International Music Festival Max Van Der Linden in Belgium in March 2017. In 2016 they performed in New York, France, and Lebanon. The group produced His Majesty, the Devil in 2013-14 at the New York International Fringe Festival, and at 59E59 Theaters’s East to Edinburgh Festival and at the Edinburgh Fringe Festival. As part of Théâtre de l’Arc-en-Ciel’s summer festival in France: Chekhov Triptych (July 2017), Invocation, Un tour du monde en musique, Prélude à l’Anastasis.