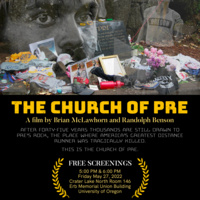 The Church of Pre: Pilgrimage and Memorialization at the Roadside Shrine for Steve Prefontaine

A film by Brian McLawhorn and Randolph Benson.

This is the premiere screening of a documentary film about the legendary University of Oregon long distance runner Steve Prefontaine and the people who make pilgrimages to his roadside memorial in Eugene, Oregon (“Pre's Rock”). The film documents Prefontaine's legacy and how his death galvanized the phenomenon of Pre's Rock being viewed as a shrine.

It explores why people make pilgrimages from all over the world to pay their respects, connect with his spirit, and draw inspiration for their own life endeavors. The topic is explored through scholarly viewpoints, while also gaining perspective from Prefontaine’s friends and former teammates. The film also examines why people leave items at Pre's Rock and where these items eventually end up. The film is based on a scholarly article by Daniel Wojcik, a UO professor and Oregon Track Club member.

“This is the best film to explain why Pre's legacy continues to thrive."–– Steve Bence, Prefontaine’s teammate and friend.