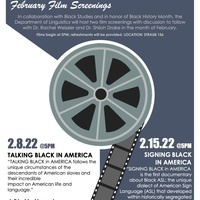 The linguistics department will present the first of two films about being Black in the US as it relates to spoken and signed languages. This film talks about African American English, and it portrays the unique circumstances that shaped the language variety now spoken by the descendants of enslaved Africans brought to the U.S. and this group’s incredible impact on American life and language. The hope is to open people's eyes to language variation and validity of AAE in the US, and how speech varieties from the African American community reflect the imprint of African language systems, the influences of regional British and Southern American dialects, and the creativity and resilience of people living through oppression, segregation and the fight for equality.