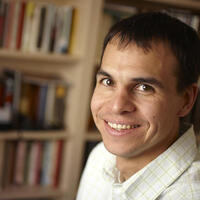 TALK: Willy Bauer (Round Valley), “We Are the Land: New Perspectives on the History of California’s Native Peoples"

Please join us for a talk by Professor Willy Bauer, Director of American Indian and Indigenous Studies and Professor of History at UNLV, on Feb. 23 at 12:15pm. His talk, “We Are the Land: New Perspectives on the History of California’s Native Peoples,” is drawn from his forthcoming book on the subject, co-authored with Damon Akins. (Zoom details are below.)

Bauer is the author of California Through Native Eyes: Reclaiming History (University of Washington Press, 2016) and "We Were All Like Migrant Workers Here": Work, Community and Memory on California's Round Valley Reservation, 1850-1941(University of North Carolina Press, 2009). He has also edited the third edition of Major Problems in American Indian History (Cengage, 2015) and published an introduction to a revised edition of John W. Caughey's McGillivray of the Creeks (University of South Carolina Press), and essays on California Indian history in the Western Historical Quarterly, Native Pathways; American Indian Culture and Economic Change in the Twentieth Century (University of Colorado Press), and A Companion to California History (Wiley-Blackwell, 2014).

The talk is co-sponsored by the University of Oregon’s Native American Studies program.