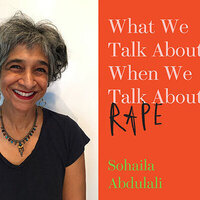 Abdulali was gang-raped as a seventeen-year-old in Mumbai. Indignant at the silence on the issue in India, she wrote an article for an Indian women’s magazine questioning how we perceive rape and rape victims. Thirty years later her story went viral in the wake of the 2012 fatal gang rape in Delhi and the global outcry that followed. In 2013, Abdulali published an op-ed in The New York Times “After Being Raped, I Was Wounded; My Honor Wasn’t” that received wide circulation.

Now, as the #metoo and #timesup movements blow open the topic of sexual assault and rape, What We Talk About When We Talk About Rape (The New Press, 2018) is a brilliant, sharp, and entirely original contribution to our understanding.

Drawing on her own experience, her research, her work with hundreds of survivors as the head of a rape crisis center in Boston, and three decades of grappling with the issue as a feminist intellectual and writer, Abdulali examines the contemporary discourse about rape and rape culture, questioning our assumptions and asking how we want to raise the next generation.

She interviews survivors whose moving personal stories of hard-won strength, humor, and wisdom collectively tell the larger story of how societies may begin to heal. Abdulali also explores what we don’t talk about. Is rape always a life-defining event? Does rape always symbolize something? Is rape worse than death? Is rape related to desire? Who gets raped? Is rape inevitable? Is one rape worse than another? How does one recover a sense of safety and joy? How do we raise sons? Is a world without rape possible?

In the tradition of Rebecca Solnit, What We Talk About When We Talk About Rape is a beautifully written, deeply intelligent, searingly honest, unexpectedly funny—and ultimately hopeful—examination of sexual assault and the global discourse on rape told through the perspective of a survivor, writer, and former counselor.

Abdulali was born in Mumbai and moved to the United States with her family when she was a teenager. Since then, she has lived in both countries. She has a BA from Brandeis University in economics and sociology and an MA from Stanford University in communication. Her undergraduate thesis dealt with the socioeconomics of rape in India. She is the author of two novels as well as children’s books and short stories. Her writing frequently appears in The Guardian and other newspapers. She lives in New York with her husband and their daughter.

Sponsors for this talk include the University of Oregon CAS Deans, Office of Institutional Equity and Diversity, Center for the Study of Women and Society, CSWS Women of Color Project, Department of Anthropology, Department of Women, Gender and Sexuality Studies, and the Office of the Dean of Students, Sexual Violence Prevention & Education.