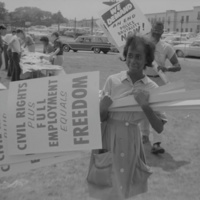 Screening and Discussion of "The March"

Watch James Blue’s award-winning film, The March, with an introduction by University of Oregon Professor Emeritus David Frank and cinema studies student Joie Littleton. James Blue’s The March (1964) is a humanistic and poetic 33-minute film of the August 28, 1963, March on Washington for Jobs and Freedom, produced and distributed to 83 foreign countries by the United States Information Agency (USIA). Q & A to follow.

Frank is a Professor Emeritus of Rhetoric, an Andrew W. Mellon grant recipient, and creator of the online exhibition The March. Littleton is the Andrew W. Mellon Research Intern graduating in Spring 2023 with a double major in cinema studies and public relations. The program will be introduced by Sherri Jones, Assistant Administrator of Education.