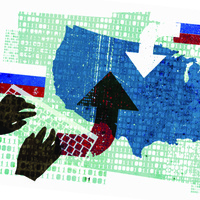 Donald Trump's 2016 victory in the Electoral College could not have occurred without 78,000 voters in three states. But were these voters affected by the Russian trolls and hackers? Trump denies it, as does Russian President Vladimir Putin, and many argue that we can never know. Drawing on earlier path-breaking work, Kathleen Hall Jamieson will argue that it’s likely the Russians did help to elect the 45th president of the United States, based on her research on unique polling data, analyses of how the press used hacked content, and synthesis of half a century of media-effects research.

Dr. Kathleen Hall Jamieson, National Academy of Sciences 2020 Public Welfare Award winner and co-founder of FactCheck.org, is a professor in the Annenberg School for Communication of the University of Pennsylvania and director of its Annenberg Public Policy Center. She has authored or co-authored 16 books, including Cyberwar: How Russian Hackers and Trolls Helped Elect a President, which won the 2019 R. R. Hawkins Award from the Association of American Publishers. Her paper “Implications of the Demise of ‘Fact’ in Political Discourse” received the American Philosophical Society’s 2016 Henry Allen Moe Prize. Jamieson is a co-founder of FactCheck.org and its subsidiary site, SciCheck, which monitors political speech for the misuse of science. She is a fellow of the American Academy of Arts and Sciences, the American Philosophical Society, the American Academy of Political and Social Science, and the International Communication Association.

This talk is co-sponsored Center for Science Communication Research (SCR, formerly Media Center for Science and Technology) and the Wayne Morse Center for Law and Politics (WMC). The SCR, housed within the School of Journalism and Communication, works to advance research in science communication to connect science and society and facilitate research-based decision making. The WMC, part of the School of Law, encourages civic engagement and inspires enlightened dialogue by bringing students, scholars, activists, policymakers, and communities together to discuss issues affecting Oregon, our nation, and the world.

This talk was made possible by the Richard W. and Laurie Johnston Lecture Fund.