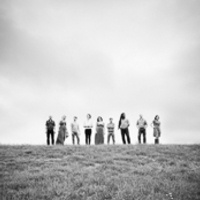 Part of the UO Vanguard Concert Series, which features many of today's most highly acclaimed artists in contemporary music. Tickets are available at the door or in advance from the UO Ticket Office, 541-346-4363.

The hip, Grammy-winning vocal ensemble, Roomful of Teeth, will present its West Coast Tour program--not to be missed! The ensemble features soprano Estelí Gomez among its nine members, who are dedicated to mining the expressive potential of the human voice. Through study with masters from singing traditions around the world, the eight-voice ensemble continually expands its vocabulary of singing techniques, and through an ongoing commissioning process, it forges a new repertoire without borders.

The band gathers annually at the Massachusetts Museum of Contemporary Art (MASS MoCA) in North Adams, Massachusetts, where the singers have studied Tuvan throat singing, yodeling, belting, Inuit throat singing, Korean P’ansori, Georgian singing, Sardinian cantu a tenore, Hindustani music and Persian classical singing with some of the world’s top performers and teachers. Roomful of Teeth won a Grammy for Best Chamber Music/Small Ensemble Performance in 2014 and has been nominated again this year in the same category for its latest incredible, ground-breaking recording, "Render."