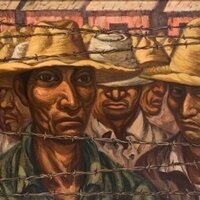 Resistance as Power: A Curatorial Response to Under the Feet of Jesus

The JSMA’s fourth “Common Seeing” exhibition supports the UO’s 2019-20 “Common Reading” of Under the Feet of Jesus by Helena Maria Viramontes. In the book, the resilient protagonist,13-year-old Estrella, works in the hot California grape fields while navigating the realities of first love, financial struggle, family separation, and illness. For more information about the “Common Reading,” including upcoming university events, visit commonreading.uoregon.edu. Two special loans from the Smithsonian American Art Museum (SAAM) by artists Emanuel Martinez and Domingo Ulloa anchor the exhibition. Martinez created Farm Workers’ Altar (1967) for the Catholic Mass held in Delano, California, at which labor activist César Chávez broke his twenty five-day fast in 1968. Ulloa, “The Father of Chicano Art,” painted Braceros (1960) after visiting a labor camp in Holtville, California. From 1942 through 1964, the U.S. government invited agricultural workers from Mexico for limited-duration assignments to relieve the worker shortage caused by World War II. Ulloa presented a sobering view of the reality of life for these braceros (from the Spanish for “one who works using his arms,” implying manual labor), who experienced poor working conditions, crowded living quarters, and other challenges while employed in the United States. These special loans provide historical and cultural touchstones for Viramontes’s 1995 novel and contemporary works from the JSMA’s permanent collection, including recent acquisitions by Ester Hernández, Victor Maldonado, and Lilliam Nieves.

Resistance as Power: A Curatorial Response to Under the Feet of Jesus is one in a series of American art exhibitions created through a multi-year, multi-institutional partnership formed by the Smithsonian American Art Museum as part of the Art Bridges + Terra Foundation Initiative.