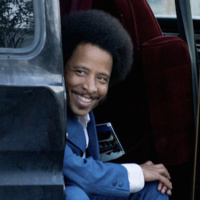 Public Discussion: Brian Coleman and Boots Riley | “Taking Over: The Life and Times of Boots Riley of The Coup”

Co-sponsored by the Oregon Humanities Center’s Endowment for Public Outreach in the Arts, Sciences, and Humanities.

Author and hip-hop journalist Brian Coleman interviews Boots Riley of The Coup, focusing on the acclaimed artist's life and work.

Boots Riley is an Oakland-based poet, rapper, writer, producer, and community activist, best known as the lead vocalist of The Coup and Street Sweeper Social Club. Steal This Album, released on indie label Dogday Records in 1998, was called "a masterpiece" by Rolling Stone magazine. The controversial and critically acclaimed album Party Music (2001) was named "Pop Album of the Year" by The Washington Post and "Hip Hop Album of the Year" by Rolling Stone.

Riley also has produced music for the television show The Simpsons and he's appeared as a guest on numerous television programs, including Politically Incorrect with Bill Maher. Recently Riley has published Boots Riley: Lyrics in Context, 1993-2012 and a screenplay, Sorry to Bother You, which is based on his experiences as a telemarketer.