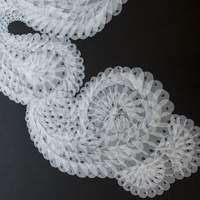 Paper Weight is Elsa Mora’s latest exhibition of painstaking works made solely of paper and glue. Mora’s 2D and 3D pieces, presented in this exhibition, are inspired by the five cognitive faculties that form the mind: consciousness, perception, thinking, judgment, andmemory. For the last eleven years, Mora has explored the expressive potential of paper, while seeing the malleability of this material as a metaphor for the mind and its ability to morph and adapt. Manipulating light and shadow is an organic part of her process, as is her use of color, and, in some cases, the lack of it. Thematically, Mora is interested in studying the intricacies of the human brain, the wonders that it can produce, and its potential for destruction and chaos. Her work as a whole reflects on universal issues of identity, connectivity, and survival.

A recipient of the UNESCO-Aschberg Bursaries for Artists, Elsa Mora was born and raised in Cuba and moved to Los Angeles in 2001, where she lived until 2014. She currently resides in New York with her husband, William Horberg, and their two children. Mora’s work has been exhibited worldwide and she also curates exhibitions, most recently for the ArtYard, a contemporary art center based in Frenchtown, NJ, where she works as both artistic director and curator. She has taught at the Vocational School of Arts in Camaguey, Cuba, and has been a visiting artist at the Art Institute of Chicago, the San Francisco State University, The Art Institute of Boston, the MoMA Design Store, and the National Gallery of Art, among other places. Her work is in the permanent collections of the National Museum of Women in the Arts in Washington, DC; the Long Beach Museum of Art, CA; and the JSMA. Mora has collaborated as an illustrator with such organizations as the Museum of Modern Art, Chronicle Books, The New York Review of Books, Penguin Random House, Oprah Magazine, Cosmopolitan, and teNeues, among others.