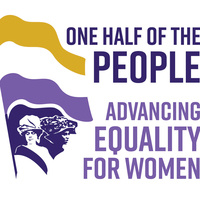 One Half of the People: Advancing Equality for Women

On April 6, 2022, the Knight Library at the University of Oregon will open a new exhibition from the National Archives, One Half of the People: Advancing Equality for Women. This exhibition was originally scheduled to open in conjunction with the 100th anniversary of the passage and ratification of the 19th Amendment, but was delayed due to the pandemic. We are excited to finally showcase this exhibition full of notable stories and images. At the founding of our country, women’s roles were rigidly defined and women were generally excluded from political and, in many ways, public life. Enslaved women were excluded entirely. Considered under the protection and authority of their husbands long into the 19th century, most women could not vote, own property, make contracts, go to court, or control any money they earned.

From the decades-long campaign for voting rights to expanding social and economic equality through legislation, and being recognized as citizens, this exhibit explores how those before us obtained the rights and privileges of citizenship promised to women today. Divided into three themes, visitors will explore: 1) how a diverse group of suffragists—individuals who supported giving voting rights to women—fought for more than 70 years using many different strategies; 2) how women continued to seek equality after the 19th Amendment; and 3) profiles on eleven women and—through National Archives records—how they lived and worked, pushing boundaries of what was accepted and expected of women. This exhibit runs through May 25, 2022.