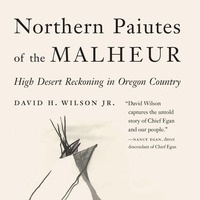 Northern Paiutes of the Malheur—High Desert Reckoning in Oregon Country

Following the 1878 Bannock War, the U.S. government stripped Paiutes of their ancestral lands and reservation. For more than a century, a false narrative has blamed Paiute Chief Egan for inciting the war. Join author David Wilson as he reveals government officials' misinformation campaign blaming the Paiutes for the injustices they suffered at the hands of these men.

Book signing to follow the talk. Copies of Northern Paiutes of the Malheur—High Desert Reckoning in Oregon Country will be available in the museum store.

Included with regular admission; free for MNCH members and UO ID card holders. Show your Oregon Trail or other EBT card for an admission discount.