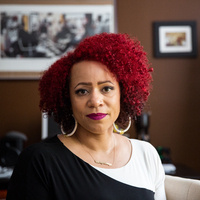 As the lead writer for New York Times Magazine’s “The 1619 Project,” a major viral multimedia initiative observing the 400th anniversary of the first African slaves arriving in America, Pulitzer Prize-winning journalist Nikole Hannah-Jones explores the lasting legacy of Black enslavement on the nation—specifically, how Black Americans pushed for the democracy we have today.

Nothing we know about American life today has been untouched by slavery. Everything from social infrastructure and segregation to music and sugar have been shaped by it. “The 1619 Project” features Black American authors, activists, journalists, and more, spreading its heartbreaking and essential message worldwide.

Hannah-Jones will speak about "The 1619 Project" and participate in a panel discussion with UO faculty and students about journalists' responsibility and role in democracy, as well as the need to remain vigilant in the fight against racial inequality at a time when the United States is deeply divided. The panel will include:

The event will conclude with an audience Q&A.

Nikole Hannah-Jones is the recipient of the 2020 Pulitzer Prize for Commentary for "The 1619 Project." Among her many accolades, Hannah-Jones is a MacArthur Genius and a winner of the National Book Award. She has also received a Peabody Award, a George Polk Award for radio reporting, and the National Magazine Award for journalism that illuminates issues of national importance.

This event is co-sponsored by the University of Oregon’s School of Journalism and Communication, the Office of the President, Office of the Provost, Division of Equity and Inclusion, the UO Common Reading, the UO Student Services and Enrollment Management, and the Lyllye Reynolds-Parker Black Cultural Center. The annual UO School of Journalism and Communication Ruhl Lecture brings the most influential voices in mass communication to campus.

Nikole Hannah-Jones was fantastic. Informative, powerful, knowledgeable, strong, funny; she is a national treasure. The 1619 Project stands tall.
I don't understand why a panel was formed around her especially when it wasn't advertised in that fashion in the first place. The facilitator seemed uncomfortable in his position and made almost no use of the student panelist (my apologies for not remembering her name) to the point that Nikole ended up deferring a question to her so that she had a chance to speak. So great having Nikole address the University on her work but poorly executed event.

This was a great event, I thought the panel was thoughtfully put together and I would love to see more events like this

Nikole Hannah-Jones and the UO faculty and student who were part of the panel provided insightful and well-researched perspectives.