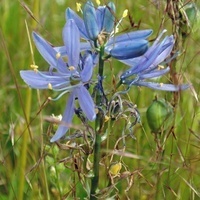 Delve into Kalapuya food culture with University of Oregon archaeologist and MNCH curator of zooarchaeology Madonna Moss. As part of her new UO course, The Archaeology of Wild Foods and Pre-Neolithic Cooking, Professor Moss and graduate students harvested and dug camas at the Oregon Country Fairgrounds in June 2017.  Under the supervision of Marie Knight (Warm Springs) they baked the camas in an earth oven overnight at the UO Many Nations

Longhouse. Come learn about the process of harvesting and baking this traditional food that was once abundant in the Willamette Valley. Free to the public. Cosponsored by Eugene Public Library as part of the 2018 National Endowment for the Arts Big Read program.

The museum partners with Eugene Public Library and the National Endowment for the Arts to present four talks exploring Tribal traditions in Oregon.

These events are part of the NEA Big Read of How We Became Human, a volume of collected poems by celebrated writer Joy Harjo of the Muscogee (Creek) Nation. Coordinated by Eugene Public Library, the local NEA Big Read offers a variety of talks, performances, workshops, exhibits, and conversations during February 2018. For a complete events calendar, visit www.eugene-or.gov/library or call 541-682-5450. The NEA Big Read is a program of the National Endowment for the Arts in partnership with Arts Midwest.