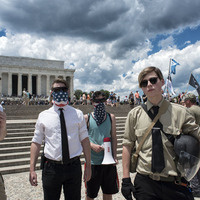 Nativism and White Supremacy: Oregon, the U.S., and Europe

Jess Campbell has been involved in rural organizing for more than 15 years. She has worked with some of the most rural communities in Oregon to fight for the commons from post offices to libraries, to organize and counterorganize in frontline communities reeling from vigilante and state violence and white nationalist organizing, and to advance experimental campaigns at the intersections of racial, economic, and social justice. She is co-author of Up in Arms: A Guide to Oregon’s Patriot Movement.

Terri Givens is an author, consultant, and political scientist. She is the author/editor of many books and articles on immigration policy, European politics and security, including Voting Radical Right in Western Europe, Immigration Policy and Security and ImmigrantPolitics: Race and Representation in Western Europe.Her most recent book is Legislating Equality: The Politics of Antidiscrimination Policy in Europe (Oxford University Press, May 2014). She is developing a textbook on comparative immigration politics, and is working on a manuscript on the historical connections between Europe and the U.S. on racism and immigration control.

Zakir Khan is the Board Chair for the Council on American-Islamic Relations - Oregon Chapter. His work as the Executive Director of the Transparency and Accountability Project earned national acclaim when it became one of two database projects nationwide to publish police disciplinary records.

Laura Pulido is the chair of the UO Ethnic Studies Department and a 2018-19 Wayne Morse Resident Scholar working on a project titled “Cultural Memory and White Supremacy in the Creation of the United States.” She is a qualitative social scientist who works at the intersection of geography and critical ethnic studies.