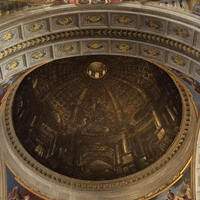 “Imperfect Circle” looks to seventeenth-century Italian Baroque music to explore ideas relating to the circle, a symbol of idealized perfection, while simultaneously confronting the imperfections of our natural world. The concept of the circle implies a sense of motion, here in connection to musical harmony. In music's mathematical relationships, we find both perfect and imperfect intervals. Both have potent results in chromatic music where the musical line ascends or descends by half-tones. Sometimes the “imperfections” of the harmonies of such chromatic motions lead to raw and intense moments in the music. We also invoke circles in the repetitive harmonies found in commonly used Baroque forms such as the chaconne and the passacaille.

The program is itself circular as trio sonatas by Dieterich Buxtehude begin and end the concert: the fourth and sixth sonatas from his remarkable Opus 1. Repetitive and obsessive figurations abound in this collection, often through the use of an ostinato movement such as the Ciaccona of the fourth sonata. The free and flowing instrumental world of the stylus phantasticus, full of contrasting textures and tempos, is especially apparent in the sixth sonata. It asks the ensemble to change tempo fourteen times. Some markings, such as con discrezione, invite the musicians to make an imaginative and free interpretation, while others demand stricter, perhaps dance-like regularity. Buxtehude's viola da gamba part at times enjoys an independent contrapuntal line, and at other times joins the continuo team, which is already full of potential texture and color as both the theorbo and the harpsichord play from this part.

Represented twice on the program are Angelo Berardi's violin works, which greatly inspired our circular thinking through his creative and elaborate canzona titles. Full of startling contrasts and long suspensions, Berardi's first canzona is titled "Chi la fa, l'aspetti" (What goes around, comes around). Here we use a "tenor" cello to perform the violin part. The violin returns to enjoy the "solo" role in Berardi's sixth canzona, "Capriccio per camera." Like Buxtehude, a profusion of tempo changes entertains and engages the listener. He explores various regional styles with movements modified by francese (French), inglese (English), and todesca (German) while circular themes abound in movements titled arcate (arches), cromatico, and even perfidia replicata (repeated betrayal).

To revel in chromaticism is one of the primary aims of tonight's program. Indeed, keyboard instruments can adeptly demonstrate the acute color changes that result from chromatic motion. One can imagine Jan Pieterszoon Sweelinck's Fantasia chromatica coming out of his dazzling improvisations for which he was known.

The works by Sweelinck and Andrea Cima connect our circular explorations to the musical traditions of the early seventeenth century. Andrea Cima belonged to a family of string players in Milan. His brother, Giovanni Paolo, wrote the first sonata that specifically asks for the violin, published in 1610. The Capriccio a 2 provides a beautiful example of early music featuring one high voice and one low voice, anchored by the continuo, the perfect formation for Pallade Musica.

Chromatic and repetitive music abound in two movements from the Sonate accademiche by Francesco Maria Veracini. The collection's title indicates works intended for a private or salon setting, not theatres or churches. Veracini's version of the ground-bass Passagallo is particularly lamenting and stark. This character is brought forth by weaving the individual lines of the two violin-family instruments throughout long passages with marked with an "S". This symbol indicates the exclusion of figures in the continuo. Following the Passagallo, the second movement contrasts with a vigorous Capriccio Cromatico. Here chromatic descents are accented and staccato, ornamented by snap figures and driving repeated notes. The blustery music perhaps coincides with Veracini's character and own violin playing, as he was known for immodesty and vivacity. His action-packed life led him to work throughout Europe where he was celebrated with great acclaim and attention in Venice, Dresden, London, and Florence, and his performances inspired many creative violinists such as Tartini and Locatelli.