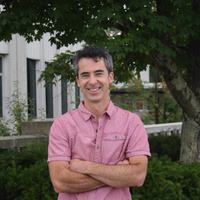 Presented by the Department of Art and Center for Art Research

Lectures will also live stream on the UO IS Media Services YouTube.

Vanishing Points is a long-term photography project that focuses on significant sites of Indigenous American presence, including sacred landforms, earthworks, documented archaeological sites and contested battlegrounds. The sites Sherwin chooses to visit and photograph are literal and metaphorical vanishing points. They are places in the landscape where two lines, or cultures, converge. While visiting these sites, Sherwin reflects on the monuments our modern culture will presumably leave behind and what the archaeological evidence of our civilization will reveal about our time on Earth. A major monograph on the Vanishing Points project was published in July 2021 by Germany-based publisher, Kehrer Verlag, one of the leading publishers of fine art photography in the world.

Michael Sherwin is a multimedia artist exploring scientific, cultural, and historical interpretations of the natural world. He has won numerous grants and awards for his work and has exhibited widely, including recent exhibitions at the Atlanta Contemporary Arts Center, Morris Museum of Art, Huntington Museum of Art, and the Center for Fine Art Photography among others. Reviews and features of his work have been published on numerous outlets, including The Washington Post, BuzzFeed News, Lenscratch and on National Public Radio. He has also lectured extensively about his work at universities and conferences across the nation. Sherwin earned an MFA from the University of Oregon in 2004, and a BFA from The Ohio State University in 1999. Currently, he is an Associate Professor of Art in the School of Art and Design at West Virginia University.

This lecture is made possible by the LaVerne Krause Lectures and Exhibitions Endowment.