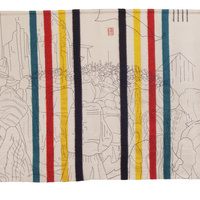 Ideas about the American West, both in popular culture and in commonly accepted historical narratives, are often based on a past that never was, and fail to take into account important events that actually occurred. The exhibition Many Wests: Artists Shape an American Idea examines the perspectives of 48 modern and contemporary artists who offer a broader an d more inclusive view of this region, which too often has been dominated by romanticized myths and Euro-American historical accounts.

Featuring artwork from the permanent collections of the Smithsonian American Art Museum (SAAM) and four partner museums in the western region of the United States, Many Wests is the culmination of a multi-year, joint curatoria initiative made possible by the Art Bridges Foundation. Along with JSMA, the SAAM’s collaborating partners include the Boise Art Museum (Boise, Idaho); the Utah Museum of Fine Arts (Salt Lake City, Utah); and the Whatcom Museum (Bellingham, Washington).

This exhibition presents an opportunity to examine previous misconceptions, question racist clichés, and highlight the multiple communities and histories that continue to form this iconic region of the United States. Working in various media, from painting and sculpture to photography and mixed media, the artists featured bring a nuanced and multifaceted history to light. Many Wests highlights many voices, especially those of artists who identify as Black, Indigenous, Asian American, Latinx, and LGBTQ+. In Many Wests, JSMA is pleased to share works by Rick Bartow (Wiyot), Ka’ila Farrell-Smith (Klamath Modoc), V. Maldonado, Rubén Trejo, and Marie Watt (Seneca) from the permanent collection. The modern and contemporary artists featured in this exhibition reveal that “the West” has always been a place of multiple stories, experiences, and cultures.

This is one in a series of American art exhibitions created through a multi-year, multi-institutional partnership formed by the Smithsonian American Art Museum as part of the Art Bridges Initiative.

Jordan Schnitzer Museum of Art (JSMA), College of Design, Department of the History of Art and Architecture

Free for UO Students and Faculty