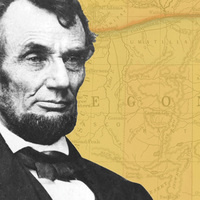 Lincoln and Oregon: A Cross-Continental Story

This slide-illustrated presentation captures the connections between President Abraham Lincoln and the new state of Oregon. Those Lincoln links include several of his Illinois friends who had moved to Oregon. In addition, Lincoln’s strong support for homesteads, railroads, and education markedly influenced life in Oregon. The president’s political connections with Oregon also helped to shape the state’s politics, especially in the rise of the Republican Party and the elections of 1860 and 1864. Altogether, this is a cross-continental historical story that needs to be more widely known.

Richard Etulain is professor emeritus of history (University of New Mexico) and the author of 50 books, including Lincoln and Oregon Country Politics in the Civil War Era (Oregon State University Press, 2013). Etulain, the son of a Basque immigrant livestockman and a sod house frontier mother, was raised on a sheep ranch in eastern Washington. He graduated from the University of Oregon with a his master’s in American literature degree and a Phd in American history and literature. Learn more about Richard Etulain at his website, richardetulain.com.

Open to the public. Beer, wine, and food will be available. Doors open at 6:00 p.m. Cosponsored by the UO Department of History and the Lane County History Musuem.