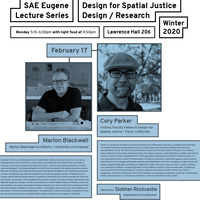 Marlon Blackwell, FAIA, is a practicing architect in Fayetteville, Arkansas, and serves as the E. Fay Jones Distinguished Professor at the Fay Jones School of Architecture and Design at the University of Arkansas. He served as Department Head from 2009–2015 and was named among the “30 Most Admired Educators” by DesignIntelligence in 2015. Work produced in his professional office, Marlon Blackwell Architects, has received national and international recognition with significant publication in books, architectural journals and magazines and numerous design awards, including the 2016 Cooper Hewitt National Design Award in Architecture. Blackwell was recently awarded the 2020 AIA Gold Medal. He was also a 2019 Resident Fellow at the American Academy in Rome, inducted into the National Academy of Design in 2018, and selected as a United States Artists Ford Fellow in 2014. He received the E. Fay Jones Gold Medal from the Arkansas AIA in 2017 and the 2012 Architecture Prize from the American Academy of Arts and Letters. A monograph of his early work, “An Architecture of the Ozarks: The Works of Marlon Blackwell”, was published in 2005 by Princeton Architectural Press, who will also publish a new monograph titled “Radical Practice” to be released in Fall 2020.

Cory Parker is a landscape architect and scholar working at the intersection of poverty, movement and landscape. His research examines transportation exclusion in public space and has been funded by the University Transportation Center, the Social Science Research Council and the Blum Center of Poverty. This research informs teaching in the design of dynamic places, focusing on analysis, social interactions, mobility and cultural diversity. Parker recently completed a PhD on the geography of homeless movement in California cities. His work assessed homeless modes of transportation through an innovative, mobile ethnography, walking, biking and riding the bus to engage with people experiencing homelessness and their conceptions of daily movement. Parker practiced landscape architecture in Seattle for 16 years, the last 12 years at Jones & Jones Architects and Landscape Architects. He led design teams in the creation of socially-inclusive landscapes, in particular working with Native American tribes on museums, highways and campus centers. Parker has a PhD in Geography, University of California, Davis (2019); Masters in Landscape Architecture, University of Washington (1998); and a Bachelors in Landscape Architecture, University of California, Davis (1993).