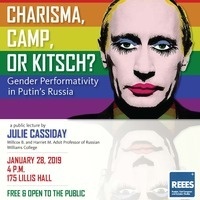 This public lecture will be given by Julie Cassiday, Willcox B. and Harriet M. Adsit Professor of Russian at Williams College.  She is author of The Enemy on Trial:  Early Soviet Courts on Stage and Screen, and her current projects include Gender, Sexual Citizenship, and Popular Culture in Putin’s Russia, a monograph devoted to the public performance of increasingly exaggerated gender roles and the policing of private sexual behavior in both public policy and popular culture in contemporary Russia.  She is also preparing a coedited book called Russian Performances and an essay in The ‘Other’ Martyrs:  Women and the Poetics of Sexuality, Sacrifice, and Death in World Literatures.  Lecture is free and open to the public.