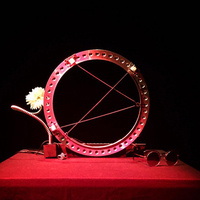 "World renowned pioneer in electronic music, Laetitia Sonami will be presenting a free concert in Room 190 at the School of Music and Dance at the University of Oregon. The concert will focus on her new instrument, the Spring Spyre, based on the application of neural networks to real-time audio synthesis. Laetitia Sonami is a 2020 Trotter Visiting Professor at the University of Oregon."

Laetitia Sonami is a sound artist, performer, and researcher. Born in France, she settled in the United States in 1975 to pursue her interest in the emerging field of electronic music and studied with Eliane Radigue, Joel Chadabe, Robert Ashley and David Behrman.

Sonami’s sound performances, live film collaborations, and sound installations focus on issues of presence and participation. She has devised new gestural controllers for performance and applies new technologies and appropriated media to achieve an expression of immediacy through sound, place, and objects.

Best known for her unique instrument, the elbow-length lady’s glove, which is fitted with an array of sensors tracking the slightest motion of her hand and body, she has performed worldwide and earned substantial international renown.

Recent projects include the design of a new instrument, the Spring Spyre, based on the application of neural networks to real-time audio synthesis; an improvisation duo, Sparrows and Ortolans, with James Fei; and Le Corps Sonore, a fully immersive sound installation on six floors of the Rubin Museum, NYC in collaboration with Eliane Radigue and Bob Bielecki.

Upcoming projects include Peripheral Vision, a text based performance piece and a new live film project with Sue-C based on Italo Calvino Cosmicomics.

Sonami has received numerous awards among which the Herb Alpert Awards in the Arts and the Foundation for Contemporary Performance Awards.

Sonami has been performing in numerous festivals across the United States, Canada, Europe, Japan, and China, among which the Ars Electronica Festival in Linz, the Bourges Music Festival in France, the Sonambiente Festival in Berlin, the Interlink festival in Japan, Bang-on-a Can, The Kitchen and Other Minds, S.F. Awards include the Alpert Award in the Arts (2002), Foundation for Contemporary Performance Arts Award (2000), the Civitella Ranieri Fellowship (2000), Studio Pass-Harvestworks residency (2001), and a Creative Work Fund award (2000) for a collaboration with Nick Bertoni and the Tinkers Workshop.

Sonami lives in Oakland, CA, and is a guest professor in the Music department at Mills College, CA, and the Milton Avery MFA program at Bard College, NY.