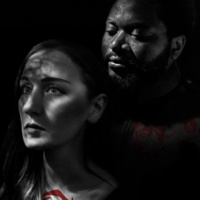 Director’s Notes
La tragédie de Carmen is an interesting approach to one of the most beloved works of the operatic repertoire. A piece that was rejected by critics and public alike in its premiere, leaving the depressed composer to die after the 33rd unsuccessful performance at the age of 37, the opera later rose to the highest level of fame. This particular rendition of the opera by Maurice Constant reduces the piece to its bare essentials. Carmen is at her most seductive and dangerous. José has a closer resemblance to the character in the Merimée novel, not the naïve José who is slowly led astray, but a murderer in his own right. The introduction of Garcia, Carmen’s former husband, sheds an interesting light on her past. It is a much more brutal and intense version and our choice to present it close up and personal I believe will bring that intensity home even more clearly. As always, the beautiful melodies and exciting orchestra pieces, brought to life here by Orchestra Next, are stirring, moving our hearts to the emotions of the characters and a story that is just as real today as when it was composed. Innocence, passion, wrath, desire, obsession, violence are all woven by Fate to lead the characters to their tragic ends.

Setting: Spain
All the characters come to this place where Carmen appears to reign supreme. The two Fates are her assistants in moving the drama forward. After their first encounter with Carmen, Micaela loses José and approaches a shrouded gypsy woman to ask for help. Micaela is frightened but finds José and brings him a letter and some money from his mother. José has committed some unspoken crime which led him to be thrown out of his town and forced to join the military in payment for his misdeeds. Micaela, very much in love with José, has hopes of bringing him back to a good life. Just when it appears that he has been distracted from involvement with Carmen, she returns, singing the famous “Habanera”.  A fight ensues, Micaela is hurt and led away, while Carmen is arrested. Carmen promises to take on José as her new lover if he will help her escape. Unable to resist her charms, he frees her and is placed under arrest himself. Zuñiga, his commanding officer, has his owns plans for the beautiful gypsy and goes to meet her, after demoting and releasing José from prison.

Carmen dances for Zuñiga but she is actually waiting for José’s arrival. She is looking forward to rewarding him for his assistance in her escape. But the clarions sound the return to the barracks for the soldiers and José, hoping to avoid further problems, tells her he must leave. Carmen is angered and disgusted at what she perceives as his weakness. But when pushed, José becomes dangerous. Zuñiga appears and a conflict follows

After Zuñiga’s “departure”, Escamillo, the famous torero, arrives at the tavern. Carmen is taken with his boldness and free spirit, much like her own. José returns, sees the attraction, and challenges Escamillo to a knife fight. The Fates intervene and he is allowed to leave for now, but he asks Carmen, if she loves him, to come to the next bullfight.

José desperately sings about Carmen’s flower that he still guards next to his heart. Carmen is touched and leads him to a type of Gypsy wedding ceremony, led by the Fates. As their marriage is about to be consummated, Garcia, Carmen’s former husband, arrives on the scene. He is there to reclaim his wife. Another fight takes place, while the Fates betray Carmen by presenting her with a deck of tarot cards that foretell her future: death. Micaela returns to make one last effort to save José but realizes he is beyond her help. Carmen’s hold over him is too strong for her to break and she calls out to God to protect her.

Carmen goes to the bullfight to join Escamillo, who she finds to be her perfect match. They declare their love and he leaves to enter the bullring. José arrives, destroyed by what he has seen and pleads with her to return to him. She refuses and at that moment cries come from the bullring. Sensing her Fate has caught up with her, she resigns herself to what she believes is her destiny.