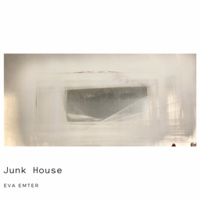 In many of my works, I deal with the topic of internal and external. More specifically, the bringing of the internal to the external. A revealing, as if in a confessional. A beast/entity that when disturbed, will try to return to a balanced state. Which is never the same state as it once was, thus continuously repeating the process of metamorphous. “The mark on the wall turns out to be a snail… life is such a muddle… sensations fidgety… philosophy… God… look at the mark… existence… is really too… what?” (E. M. Forster). Through this quote, I am thinking of what emerges from the mundane or detritus, and random strains of thought that also surface. Emerging creatures.

I recently have been thinking of what I want in order to make myself happy. A large part of my work has to do with family, which is a painful or bittersweet topic for me, and quite universal. Thinking of a twine that holds things together, the conduit, or the bloodline. An unavoidably connected through bloodline. Or a conduit line of fragmentation. Feeling out of place but still implicit in relations to each other.

I also reference Japanese folklore in my work. Through this topic I was thinking about the topic of emergence/growth and encounter. In this project I will be adding in the more recognizable as a basis for theatricality. I reference yōkai (yōkai is made up of the kanji for bewitching, attractive, calamity and the kanji for specter, apparition, mystery, and suspicious). I also reference the Kotobuki, a chimera that is an amalgamation of the twelve zodiacs. Merely, possessing an image of the Kotobuki was thought to be able to protect a person from sickness and disease. I also use white and red in my works which also alludes to protection. In the old graveyards for those in power (called kofun), pictures are painted with an Indian red made of iron oxide. This red was meant to protect the body in power from evil. Since ancient times, as in many cultures, the color white has been a symbol of purity in Japanese culture. It was closely linked to the spiritual world. Even today, Shinto “shrine maidens”, Miko wear white and red garments. I have also been thinking about the concept of protection- or rather the want to protect something. Or a window into an interior/ wounded space. A veil of protection when someone is grieving.

*Note: Due to COVID-19 restrictions, UO ID cards or building access codes are required to gain entry to these exhibitions.*