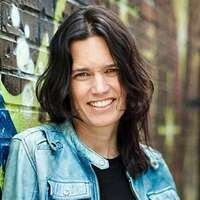 When much of the world entered pandemic lockdown in spring 2020, Leanne Betasamosake Simpson, a Michi Saagiig Nishnaabeg scholar, writer, and musician, and Robyn Maynard, a Canadian writer and scholar, and author of Policing Black Lives: State violence in Canada from slavery to the present, began writing each other letters—a gesture sparked by friendship and solidarity. They had a desire for kinship and connection in a world shattering under the intersecting crises of pandemic, police killings, and climate catastrophe. Focusing on her first letter, Simpson shares her experiences of this transformative collaboration in her virtual talk “Rehearsals for Living: My First Letter” on Tuesday, April 5, 2022, at 12 p.m. as the OHC’s 2021–22 Robert D. Clark Lecturer. Her collaboration with Maynard has resulted in a book, Rehearsals for Living, which will be released in the U.S. in June 2022.

Leanne Betasamosake Simpson, a member of Alderville First Nation, has worked for over two decades as an independent scholar using Nishnaabeg intellectual practices—teaching at universities across Canada and the U.S. Her work is the result of a journey to reconnect to an ancestral homeland and traditions that she was disconnected from as a child and youth, living off the reserve. As a young adult, Simpson immersed herself in her cultural traditions by connecting with Northern Nishnaabeg elders in community. She earned a PhD in Interdisciplinary Studies from the University of Manitoba and currently teaches at the Dechinta Centre for Research and Learning, an Indigenous land-based education center in northern Canada.

A strong proponent of Indigenous resurgence, Simpson focuses on rebuilding Indigenous nationhood by using Indigenous knowledge and local engagement with land and community. Simpson’s philosophy is grounded in an Indigenous perspective and is focused not on a return to the past, but on bringing traditional ways of living into a collective future—a future necessarily absent the exploitation of the earth and absent the ongoing violence against Black and Indigenous peoples.

Simpson applies Nishnaabeg methods of meaning-making through the practice of Nishnaabeg storytelling which permeates her music and writing. She writes from an Indigenous worldview rooted in an embodied relationality to the natural environment.

Among her numerous books are As We Have Always Done: Indigenous Freedom Through Radical Resistance (2017), the novel Noopiming: The Cure for White Ladies (2021), and A Short History of the Blockade: Giant Beavers, Diplomacy and Regeneration in Nishnaabewin (2021). Of her four albums, the latest is the award-winning Theory of Ice released in 2021.

Simpson was interviewed by Paul Peppis on UO Today. Watch at youtube.com/c/OregonHumanitiesCenter.

Simpson’s virtual talk is free and open to the public. Register at ohc.uoregon.edu/ calendar_event/leanne-betasamosake-simpson