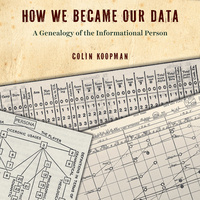 How We Became Our Data: A Genealogy of the Informational Person

Featuring Colin Koopman, associate professor of philosophy and director of the New Media and Culture Program at the University of Oregon. His books include: Pragmatism as Transition: Historicity and Hope in James, Dewey, and Rorty (2009); Genealogy as Critique: Foucault and the Problems of Modernity (2013); and How We Became Our Data: A Genealogy of the Informational Person (2019). His essays and articles have appeared in The New York Times and Aeon as well as in academic journals such as Critical Inquiry, Contemporary Political Theory, Diacritics, and New Media & Society.

Presented by the Wayne Morse Center’s Program for Democratic Governance.  Cosponsored by the UO Department of Philosophy and Oregon Data Science.