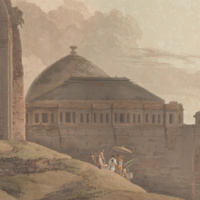 History of Art and Architecture Gilkey Lecture: Worldmaking in Aquatint

Over the span of fifty years, roughly 1780-1830, a new printmaking medium called aquatint became the preferred choice for representations of travel by British artists and publishers. How did this new medium shape the way that Britons saw the world and their place within it? What can we learn from these prints, which were produced in an age of dramatic imperial expansion?

This talk by Douglas Fordham, University of Virginia, examines the relationship between print medium and imperial message, and the role that a new book format, the aquatint travel book, played in this dialogue.