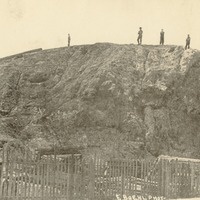 In 1869, the so-called Big Mound of St. Louis was destroyed. But the destruction and desecration of this Indigenous monument did not end there. In this presentation, I trace the multiple destructions endured by the monument and the politics behind its memorialization. I question the conmemoration efforts made in 1929 under the sponsorship of the Colonial Dames of America, an association dedicated to honoring the memory of the very agents involved in the destruction and disposession of the indigenous populations the marker they installed supposedly conmemorates. Finally, I discuss the displacement of this marker in 2014 by the Missouri Department of Transportation in connection with the construction of the Stan Musial Veterans Memorial Bridge. I argue that successive efforts to conmemorate the monument, as well as other indigenous sites, have operated as a set of settler colonial technologies that contributed to several erasures, eliding the claims of Indigenous populations and constructing an image of these monuments as empty, abandoned ruins through their physical and conceptual un-making.

Ana María León is an architect and a historian of objects, buildings, and landscapes. Her work studies how spatial practices of power and resistance shape the modernity of the Americas. She is co-founder of several collectives laboring to broaden the reach of architectural history including the Feminist Art and Architecture Collaborative (where she was active 2013–2020), Detroit Resists, Nuestro Norte es el Sur, and the Settler Colonial City Project. She recently published her first book, titled Modernity for the Masses: Antonio Bonet’s Dreams for Buenos Aires (University of Texas Press, 2021). León teaches at the University of Michigan where she co-directs the Decolonizing Pedagogies Workshop.