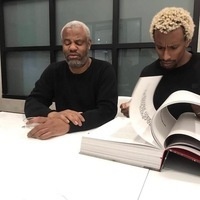 Hamza Walker will be in conversation with Mahfuz Sultan.

The event is free and open to the public and live on Zoom- register here. The lecture will also live stream on the Department of Art Facebook.

Hamza Walker is the director of the Los Angeles nonprofit art space LAXART and an adjunct professor at the School of Art Institute of Chicago. Prior to joining LAXART in 2016, he was director of education and associate curator at the Renaissance Society, a non-collecting contemporary art museum in Chicago, for 22 years where he organized numerous shows and public programming and wrote extensively on the field of contemporary art.

Notable shows at the Renaissance Society include “Suicide Narcissus” (2013), “Black Is, Black Ain’t” (2008) and “New Video, New Europe” (2004). In addition to his work at the Renaissance Society, Walker also co-curated the Made in L.A. 2016 biennial. He has won the Walter Hopps Award for Curatorial Achievement in 2014 and the prestigious Ordway Prize in 2010 for his significant impact on the field of contemporary art.

Mahfuz Sultan is an architect, writer, and founder of CLOCKS, a research and design practice based in Los Angeles.

free and open to the public

Will this be recorded? I have class during this time but am very interested in the subject.