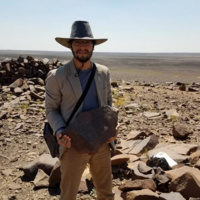 The corpus of pre-Islamic Arabic inscriptions in the Arabic script has expanded greatly over the last decade, shedding important light on the status of Arabic as a written language in the century before the rise of Islam. This talk by Dr. Ahmad Al-Jallad, Sofia Chair in Arabic Studies, will present these new discoveries to the public and explain how they are transforming the way we think about the language of the Qur’an and its orthography.