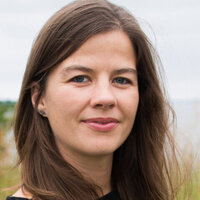 "On Rising Together: Creative and Collective Responses to the Climate Crisis"

With each record-breaking storm or flood it becomes clearer that climate change and rising seas are transforming the coastline of the United States. Writer Elizabeth Rush travelled from vanishing shorelines in New England to inundated bayous in Louisiana to chronicle the impact of sea level rise on vulnerable communities and ecosystems. She employed a literary approach for her recent book Rising: Dispatches from the New American Shore, a finalist for the 2019 Pulitzer Prize in General Nonfiction. “I believe that language can lessen the distance between humans and the world of which we are a part; I believe that it can foster interspecies intimacy and, as a result, care.”

Elizabeth Rush, the Oregon Humanities Center's 2019–20 Robert D. Clark Lecturer, will give a talk, “On Rising Together: Creative and Collective Responses to the Climate Crisis,” on Thursday, March 5, 2020 at 7:30 p.m. at the First United Methodist Church, 1376 Olive St. in Eugene.

What might we learn from the people living on climate change’s front lines about the future that we share? In her talk, Rush will speak about a small community on the eastern shore of Staten Island––a place that hurricane Sandy both undid and remade from the ground up––investigating the storm’s aftermath and the radical decisions residents made about how to overcome their shared vulnerability. She will give voice to those who have traditionally been left out of environmental discourse and how we might make the conversation more whole moving forward.

Elizabeth Rush is the author of Rising: Dispatches from the New American Shore and Still Lifes from a Vanishing City: Essays and Photographs from Yangon, Myanmar. Her writing has appeared or is forthcoming in The New York Times, The Washington Post, The Gaurdian, Harper’s, The Atlantic, Pacific Standard, and the New Republic, among others. She is the recipient of fellowships and grants including the Howard Foundation Fellowship, awarded by Brown University; the Society for Environmental Journalism Grant; the Metcalf Institute Climate Change Adaptation Fellowship; and the Science in Society Award from the National Association of Science Writers. She received her MFA in nonfiction from Southern New Hampshire University, and teaches creative nonfiction at Brown University.