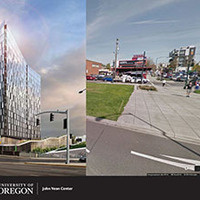 Design Week Portland and the University of Oregon John Yeon Center for Architecture and the Landscape with Portland Monthly present an October 12, 2015 evening of discussion about architecture and the east side’s future with architects and principal designers of the Burnside Bridgehead.

It’s been decades since Portland has seen such an architecturally dramatic reshaping of three contiguous, more visible city blocks as what is taking place at E. Burnside and NE Grand Avenue—the Burnside Bridgehead. Designed by Skylab Architecture, Works Partnership, and Guerilla Development, the three buildings—Block 67, Block 75, and the “Fair-Haired Dumbbell”—may not be large (21, 9, and 6 stories, respectively). But each reinterprets—some might say, defies—the usual rules of Portland architectural politeness.

Who are the designers behind the buildings? What kind of Portlanders will live, work, and sell things in them? What collective experience—i.e. neighborhood—will they create? What do these bold statements signal for downtown and the Central Eastside in particular?  And what, if anything, should this new district and architectural sensibility mean to an almost certain-to-be-built, new, seismically resilient Burnside Bridge?

Join us for an evening of spirited conversation and all-but-guaranteed disagreements about architecture and the east side’s future with Jeff Kovel, founder of Skylab Architecture, Carrie Strickland and Bill Neburka of Works Partnership; and Kevin Cavenaugh of Guerilla Development—the principal designers of three buildings rising at the Burnside Bridgehead.

Carrie Strickland and William Neburka launched Works Partnership in 2005. They describe their designs as walking “a line between sexy and stern” with “echoes simplicity in the face of ever evolving complexity, a quiet amid the cacophony of the newest.” The firm has won more than 25 design awards, among them the 2013 AIA NW&P Region Emerging Firm award, a place in Architectural Record’s 2010 Design Vanguard publication, and a 2010 Progressive Architecture award

Jeff Kovel and Skylab Architecture have been designing boundary-pushing buildings and environments since 2000. Projects have ranged from stylish residences like the Hoke House and the prefab prototype Homb to the architecture/landscape merge of the Columbia Wastewater Treatment Plant and Nike’s Camp Victory for the 2012 Olympic Trials in Eugene. The firm is currently at work on the 887,000-square-foot “Building 2” in Nike World Headquarters expansion.

Kevin Cavenaugh has been designing and building innovative infill and adaptive reuse projects in Portland for the last 15 years with the motto “Changing Portland 3,000 square feet at a time.” His developments have ranged from the Box and One to the LEED Platinum Burnside Rocket. Most recently, he transformed an a former Dodge dealership into the foodie paradise The Ocean and an empty Sandy Boulevard triangle into The Zipper. He was a 2008 Loeb Fellow at the Harvard Graduate School of Design.

Cover: $10 Suggested Donation at the Door | Free to Students with Current ID