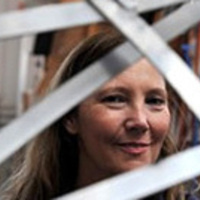 “I began showing my work in 1985 and have always been interested in the meaning inherent in materials, as well as the linguistic implications of what something is called, which my art has often exposed the difference between. I am currently using more traditional art materials like paper, ceramics, paint, and wood but have also, and continue to use landscape materials bacteria and more contemporary means of facture like digital modeling and production. I feel the material is often the message, but the message is configured by form. Color has been an important aspect of what I do, and have done, and I use it to basically destabilize, dematerialize, and question the validity of the symbolic and semiotic aspects of my art. I am a female artist and my work reflects this.” – Liz Larner

Liz Larner received a BFA from the CalArts in 1985. She lives and works in Los Angeles. Larner has been the subject of numerous solo museum exhibitions, including a forthcoming exhibition at the Aspen Art Museum, 2015; the Art Institute of Chicago, 2015; the Museum of Contemporary Art, Los Angeles, 2001-02; the Museum of Applied Arts Vienna, Austria, 1998; and Kunsthalle Basel, Switzerland, 1997. She has been commissioned for multiple public artworks including the Byron G. Rogers Federal Building and Courthouse Plaza, Denver, 2015; University of California, San Francisco, Mission Bay Project, 2003; and the Riverside Pedestrian Bridge at Walt Disney Studios, Burbank, 2000. She has been the recipient of multiple awards including the Nancy Graves Foundation Grant, 2014; Smithsonian American Art Museum Lucelia Artist Award, 2002; and the Guggenheim Fellowship, 1999. Larner is represented by Regen Projects in Los Angeles, Tanya Bonakdar Gallery in New York, the Modern Institute in Glasgow, Scotland and Max Hetzler Gallery in Berlin.

This lecture is made possible by the Davis Family Fund.

College of Design, Department of Art