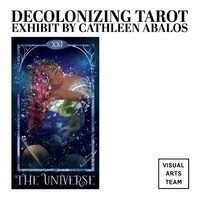 The Visual Arts Team is excited to present Decolonizing Tarot, an exhibit by Cathleen Abalos. Find the Visual Arts Team on Instagram @uovisualarts or Facebook @visualartsteam, where you can see exhibition updates and video artist talks for each show!

Show runs September 24 through October 29 in the EMU Aperture gallery.

The show features artwork from Decolonized Tarot, “a new independent tarot deck that centers Filipino culture while celebrating all others,” created by Maritess Zurbano and Cathleen Abalos. Check out @decolonizedtarot on Instagram or check out their website decolonizedtarot.com!

The Decolonized Tarot is a tarot deck celebrating people from all walks of life, all colors, and all shapes and sizes. The images are rooted in Filipino mysticism and history, while also referencing other cultures. By creating this deck, my aim is to show people a reimagined, fantastical, world through each of the 78 tarot cards.

The artwork was created digitally, using the iPad Pro, Apple Pencil, and the art program Procreate. Since my art style tends to focus on lighting and color and how they depict emotions and affect environments, I tried to include as much of that in each card. Because there is so much meaning behind tarot cards, I made sure the artwork didn’t deter away from that. I also included a lot of indigenous and Filipino-inspired patterns to pay homage to my (and my co-creator partner, Maritess Zurbano’s) Filipino roots. We are both Filipino-American, so a lot of the time for this project was spent researching the various cultures of the Philippines that existed before the colonization of the Spanish. Since this deck is meant to celebrate all people, it is our intention to include of the world cultures besides the Philippines, as well as include people from the LGBTQ+ community, people of all body shapes and sizes, and include the imagination of the disabled community.

Cathleen is a visual development artist and illustrator in Los Angeles. She works in both digital and traditional media, specializing in background and character design, as well as comics and storyboarding. She has worked for clients such as Upper Deck / Marvel Comics, Lethal Chicken Games, the city of Old Town Pasadena, Oh Rio! Productions, and the Ronald McDonald House Charities. Her artwork has been featured in the Torrance Art Museum, the San Diego Art Institute, and numerous galleries in the Southern California region. She also co-published the children’s book, “It’s Sandcastle Building Day”.

When she’s not working on projects, she is exhibiting her work at comic conventions throughout the country (some of which include San Diego Comic-Con, C2E2, Salt Lake City Comic Con, and New York Comic Con). Her work has also been exhibited in galleries and museums in the southern California region.

Some of Cathleen’s current projects include concept and character design work for the 2D animated film “What We’re Meant For”, tarot card illustrations for “Decolonized Tarot”, a YA fantasy graphic novel based on a filipino magician, and the webcomic series “Herowood Boulevard”.