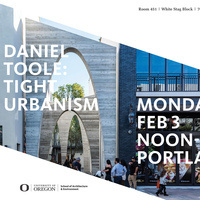 Please join us on Monday, Feb 3 at noon for a lunch discussion with Daniel Toole.

Daniel Toole Works LLC is an architecture and urban design studio that blurs the boundaries between the city, landscape, and building with a careful attention to detail. The practice places importance on the interplay of light and materials to create unexpected spaces for contemplation.

Based in the Pacific Northwest, the studio designs at multiple scales—from furniture to masterplans--and continues to work on projects on both coasts of the United States. Current projects include a pair of single family residences in Seattle, a historic renovation in Portland, a second alley in the Miami Design District, and continual research on materials and intimate urban spaces.

Daniel Toole was raised in the Pacific Northwest and has traveled and worked extensively throughout North America, Europe, and Asia. Over the past decade, he has studied how different cultures use their alleyways, passages, nooks, and crannies—a collection of spaces he calls “tight urbanism”. Trespassing, loitering, and observing these intimate spaces has inspired his work in architecture and urban design, culminating in his first realized alley design projects in the Miami Design District.

Daniel founded Daniel Toole Works in 2013 during a Master's of Architecture at Harvard’s GSD, and has designed residences, public buildings, landscapes, and master plans independently and with various offices including Rick Joy Architects, Barkow Leibinger Architects, Perkins + Will, and Allied Works Architecture. He received his Bachelor’s of Architecture from the University of Oregon and his Master’s of Urban Design from the Harvard Graduate School of Design. He completed additional studies at Columbia University in New York City and Paris, as well as a year-long DAAD research grant from the German government at the Technical University of Berlin. He published a book on his alleyway explorations, Tight Urbanism, in 2010 and has received numerous other design awards and fellowships.