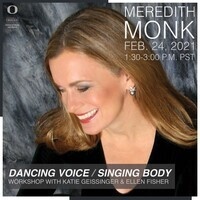 Beginning with breathing techniques and a detailed vocal and movement warm-up, participants work with the voice and body as multifaceted instruments for exploring range, timbre, gesture, resonance, character, landscape and rhythm. The work aims to uncover the fundamentals of performance as a vehicle for personal transformation. Selected pieces from Meredith Monk’s repertoire will also be taught. Participants should wear loose, comfortable clothing and be prepared to move. Register now at: https://oregon.qualtrics.com/jfe/form/SV_bga65I2h8xibdjg

Campus co-sponsors for this virtual event include: Oregon Humanities Center's Endowment for Public Outreach in the Arts, Sciences, and Humanities; Division of Equity and Inclusion; Trotter Fellowship; and Jordan Schnitzer Museum of Art.

Teacher Bios: Ellen Fisher is a movement-based performance artist whose work integrates gestural actions with visual elements such as film and shadow play. Ellen’s performance work is informed by her ethnographic research in the rituals and trance dances of South Asia, particularly Sri Lanka, for which she has received ACCNY grants and a Fulbright. She has also been granted funding for her solo work from the NEA, NYFA, and Jerome Foundation, among others. Ellen began performing with Meredith Monk/The House in the 1970s, and continues today. She and Katie Geissinger have led the Meredith Monk & Vocal Ensemble education program involving New York City high school students since 2009. Ellen also teaches and lectures regularly on dance both domestically and internationally.
Katie Geissinger has performed with Meredith Monk worldwide since 1990, in concert and in music theater pieces such as ATLAS, the Grammy-nominated impermanence, On Behalf of Nature (all on ECM), Cellular Songs and The Politics of Quiet, for which she received an ensemble Bessie award. Other career highlights include the premiere of Bang on a Can’s Obie-winning The Carbon Copy Building (Cantaloupe), touring with Philip Glass and Robert Wilson’s Einstein on the Beach (Elektra Nonesuch), and performances at Carnegie Hall as a soloist in Bach’s Magnificat, Honegger’s Le Roi David, and Monk’s WEAVE. Her Broadway credits include Baz Luhrmann’s production of La Boheme, and Coram Boy. Katie is a member of the professional Cathedral Choir of St. John the Divine under the direction of Kent Tritle. She has recorded for ECM, Cantaloupe, and Elektra Nonesuch. Teaching experience ranges from choral work in Estonia and San Francisco to workshops at Naropa, Oberlin, the Experimental Theater Wing at NYU, Berklee, and the Carnegie Hall Professional Training Workshop.