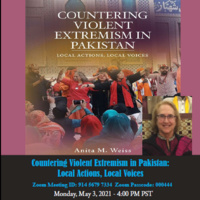 Please join us for a discussion of Countering Violent Extremism in Pakistan: Local Actions, Local Voices, the new book by Anita Weiss, Professor of International and Global Studies at the University of Oregon on Monday, May 3, 2021 at 4:00 PM PST via Zoom with the passcode 000444. Professor Weiss will be joined in the discussion by John Esposito (Georgetown University), Farahnaz Ispahani (The Wilson Center), and Raza Rumi (Ithaca College).

The book identifies and analyzes the impact of the various ways in which local people are responding, taking stands, recapturing their culture, and saying ‘stop’ to the violent extremism that has manifested over the past decade in Pakistan. Local groups throughout Pakistan are engaging in various kinds of social negotiations and actions to lessen the violence that has plagued the country since the 1979 Soviet invasion of Afghanistan which let loose a barrage of violence that overflowed into its borders. In so many ways, Pakistanis are engaging in powerful actions that transform how people think about their own society, impending extremists’ rants while acting on envisioning alternative futures. The book is available for purchase at this link.

Anita Weiss received her doctorate in sociology from UC Berkeley and is professor of International and Global Studies at the UO. She has published extensively on social development, gender issues and political Islam in Pakistan. She was in Pakistan between 2016-19 conducting interviews for her new book, her eighth, Countering Violent Extremism in Pakistan: Local Actions, Local Voices (OUP 2020) on a grant from the Harry Frank Guggenheim Foundation. Professor Weiss stepped down after seven years as Head of the Department of International Studies to conduct this research in Pakistan. She is a member of the editorial board of Globalizations as well as a number of journals from Pakistan, has been a member of the Research Advisory Board of the Pakistan National Commission on the Status of Women (NCSW), has been Treasurer and Vice President of the American Institute of Pakistan Studies, has served as Chair of the South Asian Council of the Association for Asian Studies, and has received numerous awards, fellowships and grants related to her work.

John L. Esposito is University Professor, Professor of Religion and International Affairs and Founding Director of the Prince Alwaleed bin Talal Center for Muslim-Christian Understanding and of 'The Bridge Initiative: Protecting Pluralism – Ending Islamophobia' at Georgetown University. Past President of the American Academy of Religion and Middle East Studies Association of North America, his more than 55 books include: Islam: the Straight Path; The Future of Islam; Who Speaks for Islam?: What a Billion Muslims Really Think; Religion and Violence; Unholy War: Terror in the Name of Islam; The Islamic Threat: Myth or Reality?; and Islam and Democracy after the Arab Spring.  Professor Esposito’s writings are translated into more than 45 languages.

Farahnaz Ispahani is a human rights advocate specializing in advocacy for religious minorities and women's rights. She is a Global Fellow at the Woodrow Wilson Center, a Senior Fellow at the Religious Freedom Institute and a member of the Anti-Defamation League Task Force on Middle East Minorities in Washington, D. C. Ispahani is a former politician who served as a member of the National Assembly of Pakistan between 2008 - 2012. In Parliament she focused on issues of terrorism, human rights, gender based violence, minority rights and US-Pakistan relations. As a journalist, she was Executive Producer and Managing Editor of Voice of America's Urdu TV and has also worked at ABC News, CNN and MSNBC. Her most recent book is entitled Purifying the Land of the Pure: A History of Pakistan's Religious Minorities.

Raza Ahmad Rumi is a policy analyst, journalist and an author. He is Director of the Park Center for Independent Media and teaches in the journalism department. He is also Visiting Faculty at Cornell Institute for Public Affairs. During 2015-2017, Raza was a scholar in residence at IC and taught courses in journalism and writing departments as well as at the Gallatin School of Individualized Study, New York University. Raza has been a fellow at the New America Foundation, United States Institute of Peace and the National Endowment for Democracy. He is a member of think tank at Laboratory for Global Performance and Politics, Georgetown University; and a nonresident fellow at the Berkley Center for Religion, Peace and World Affairs. Raza was the editor of Daily Times, The Friday Times and a TV broadcaster in Pakistan before he moved to the United States in 2014. Raza is the author of Delhi by Heart: Impressions of a Pakistani Traveller, The Fractious Path: Pakistan’s Democratic Transition and Identity and Faith and Conflict. His most recent book Being Pakistani: Society Culture and the Arts was published in June 2018 by Harper Collins, India. He co-edited a volume of essays entitled Rethinking Pakistan that was published by Anthem Press in September 2020.

This talk will take place via Zoom: