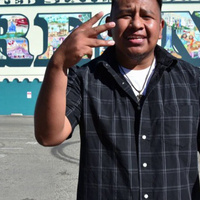 Miguel Villegas Ventura was born in San Miguel Cuevas- Nuu Yuku, located in the Mixteca Baja of Oaxaca, Mexico. Nùù Yúku is an Mixtec community with strong migration to the United States. He arrived to California when he was seven year-old with his mother and three older siblings. His two older siblings worked in the files– agricultural fields at a very young age with their mother to help provide for the family. Miguel being the youngest had the opportunity to attend school along with one of his brothers. As a child speaking Mixteco in a foreign place and culture, he faced various obstacles. Growing up in the City of Fresno, not knowing other people who looked or spoke like him, made him realized that he was different. This influenced Miguel into not wanting to speak Mixteco because he believe it to be not valuable. For period of time he stopped speaking Mixteco thinking it was an impediment to assimilate into the “American life.” As young kid seeking a place to belong to and someone to relate to he discovered rap music when he was 12 years old. Miguel  was introduced to Chicano Rap music- a genre that Mexican-Americans in California developed to speak out about their struggles. He also began writing small verses drawing from his own experience. Gradually his exposure to different styles, contents and rappers grew.  When he was 17 years-old, he began to listen to rappers from different countries. Listening to an array of rappers and contents made him realized that rap music goes beyond being of a particular group, culture, race, and message. In 2010 Miguel, joined Autonomos, a Oaxacan youth group which was the push he needed. He understood his rap music as tool to motivate his Oaxaqueño peers. This brought meaning lyrics. He wrote a trilingual song- Mixteco, Spanish, and English, about reclaiming identity, language and culture. His music and work demonstrates his commitment to his Mixteco community. He has worked as community organizer, interpreter, and cultural project coordinator with the Centro Binacional Para El Desarrollo Indígena Oaxaqueño (CBDIO).  He helped developed and taught a Mixtec writing workshop.  He also volunteers as a youth coordinator with the Frente Indígena de Organizaciones Binacionales (FIOB) Committee in Fresno. Miguel, also a college student, hopes to major in Linguistic to continue preserving his native language. Aside from writing music, he also practices traditional dances from Nuu Yuku- La Danza de los Diablitos and Danza de Los Chareos. His artistic name is Una Isu which means Eight Deer in Mixtec; a tribute to the legendary Mixtec leader Eight Deer Jaguar Claw. Miguel has performed in different cities such as Los Angeles, Oxnard, Santa Cruz, Oakland, New York, Mexico City and of course his hometown Fresno, California.  His most prominent participations are the festival “Secretos De Socrates México: Los Grandes Debates” 2016 edition. Where he gave a performance of Rap in Natives Languages ​​along with another three artists of the languages in Hñähñu, Totonaku and Nahuatl. He also performed his music in the cradle of Hip-hop, in Bronx, New York, along with Mare Advertencia Lirika and Mapuche Rapper Luanko. Through his work, volunteer work, and music he continues to influence positively the community.

School of Music and Dance, Center for Latino/a and Latin American Studies