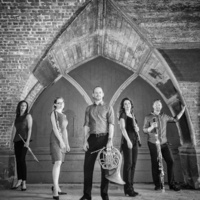 Now in its 22nd season, Zéphyros Winds brings together five soloists known for their virtuosic performance style to perform a wide range of music for winds with “near-symphonic sound” (New London Day). Named for the Greek God of the West Wind, Zéphyros had its New York concerto debut opening the 2004 Mostly Mozart Festival, and has appeared at the nation’s most prestigious concert venues, including The Library of Congress, Wolf Trap, Carnegie’s Weill Hall, Dumbarton Oaks and Lincoln Center’s Great Performers series.

Recent highlights include a performance at New York City’s Music in Midtown, a tour of New England featuring a performance of Irving Fine’s music for the Fine Memorial Concert at Brandeis University and the US premiere of Wolfgang Rihm’s Quintet for Winds. The 2017-18 season takes Zéphyros across the country from Pennsylvania to California, including performances and residencies at the Chamber Music Society of Logan, Brigham Young University, Stanford University and the Morrison Artist Series at San Francisco State University.

Since its inception, Zéphyros has performed at many of the country’s most prominent spaces and internationally. In 2010, Zéphyros performed in Beijing, China, at the National Centre for the Performing Arts’ May Festival. The Philadelphia Museum of Art engaged Zéphyros to create a program complimenting their exhibition, “Manet and the Sea”, and at the invitation of the French Embassy in Washington DC, Zéphyros performed a gala concert celebrating the centenary of Francis Poulenc’s birth. Other performances include Duke Performances at Duke University, “The Movado Hour” at The Baryshnikov Art Center in New York City, Da Camera Society of Los Angeles and the Skaneateles Festival.

Numerous Radio broadcasts include “Performance Today” for National Public Radio (most recently in early 2016), Public Radio International’s “Music from Chautauqua” and WNYC’s “Around New York.” Their live recording of Irving Fine’s “Partita for Woodwind Quintet” was released on Bridge Records.

Performances encompass the repertoire for wind quintet, works for winds and piano, winds and strings and works from solos through wind ensemble. In 2016, Zéphyros began presenting a stunning arrangement of Barber’s “Knoxville: Summer 1915” with soprano Elizabeth Pacheco Rose, and the ensemble has also frequently collaborated with pianist Rieko Aizawa. The ensemble’s programs range widely, with programs inspired by Bach, Strauss, Schoenberg and Saint-Seans. Also committed to new music, Zephyros is a recipient of a Commissioning Grant from Chamber Music America to commission composer David Sanford to write a new work for wind quintet. The new wind quintet will be premiered in the 2018-2019 season.

The ensemble gained attention in 1995, when, one year after its formation, it won both the First and Grand Prizes at the Fischoff National Chamber Music Competition, becoming the first wind quintet in the competition’s 22-year history to do so.